I am a ...
Provider
Employer

What are Electronic Cigarettes?

You may have heard of e-cigarettes, e-pens, e-pipes or vaporizers.  But what are they? How do they work? And, most importantly, are they safe?  Officially known as Electronic Nicotine Delivery Systems (ENDS), they are battery-operated devices that contain a liquid cartridge. When heated, the liquid creates a vapor that is inhaled by the user. This is often called “vaping”. Originally marketed as a safe alternative to traditional cigarettes, consumers were given very little information, if any, about the ingredients of the liquid. Although e-cigarettes do not contain tar or produce tobacco smoke like traditional cigarettes, most do contain nicotine and other potentially harmful chemicals. 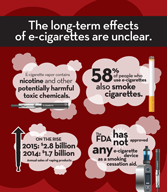 The popularity of e-cigarettes and other ENDS have caught the attention of the Centers for Disease Control (CDC) and other governmental agencies. Recently, the Food and Drug Administration (FDA) stepped in to regulate ENDS products. New FDA regulations classified the devices as tobacco products, and you now must be 18 years of age or older to purchase them. In 2016, the Surgeon General’s report warned about the increase of e-cigarette use amongst Americans, especially middle and high school aged children. The report also found that e-cigarette manufacturers were specifically targeting youth in the same way tobacco companies did in the past. Nicotine addiction is greater in young people because it affects their developing brains. Nicotine can also harm long-term cognitive thinking and increase the risk of addiction to other drugs.

Scientists are still studying the long-term effects of e-cigarettes. Research continues on the safety of vaporizing nicotine and other chemicals found in ENDS. The FDA has not approved any ENDS device as a smoking cessation aid. Don’t leave your health up to chance. Talk with your doctor about finding a clear and safe path to a smoke-free you!